When I first sat down to write this post, I had not seen the photos I took during the trip. 500 miles behind the wheel in one day is quite a feat for anyone, or any car for that matter. Even with all the running around, the Volvo seemed to ask for more as I was running the engine to allow the turbo cool off. Any way you cut it, 9.5 hours behind the wheel in one day is about my limit...possibly even a little beyond what I'm capable of. 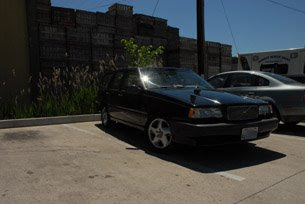 I got on the road a little late today. I had planned on leaving my house by 9:00 AM so I could get to the first planned stop, Frank Lloyd Wright's Fallingwater by 1:00 PM. The goal was to be able to tour the house, then have some time to take some photos before heading in to Pittsburgh for dinner at 5:00. As it happens, I didn't get on the road until 10:30 which means I didn't get to Fallingwater until 2:30. Basically, I had time to get lunch there before taking the tour, and no time at all to explore the grounds and take photos either before or after the tour.

The day was absolutely perfect for a nice, long, drive. The trip out took me Hwy 15 north to I-70 in Frederick, MD to I-68 in Hancock, MD (Pictured above). I-68 between Hancock, MD and Cumberland, MD is very hilly. I counted nearly 12 mountain passes that I crossed in that stretch of highway. On around number 10, I decided I would be taking the Turnpike back to Virginia even if my GPS told me not to. Somewhere soon after Cumberland, MD, I-68 and US 40 part ways, my GPS unit instructed me to take 40. The sky in the Pennsylvania's Laurel Highlands is big. Very big. (Pictured Below) You don't realize it until you've driven through on a perfectly cloudless day. Near every peak of every mountain, the horizon appears significantly lower than it does anywhere else I've ever experienced. At points of the drive, the only thing I remember seeing in the windshield was just a solid, deep blue wall. The richness of the color was striking.

The Laurel Highlands could be a trip just inside itself. There was so much I would have liked to stop at if I would have had time. For me, the prime attraction would be all of the roadside Mom and Pop restaurants. It seemed that every couple hundred meters...for the entire trip between I-68 and Fallingwater, there was another. A month wouldn't be enough to experience all of them, even if you were eating at a different one for breakfast, lunch, dinner, and late evening libations. Since I didn't have time, however, I'll spare the details. It leaves a good excuse for me to return.

Fallingwater ended up being better than I had originally 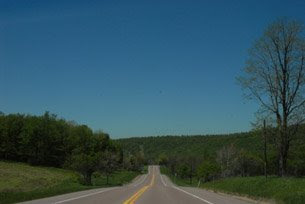 thought it would be. They offer two tours, I took the basic $18.00 tour. If you plan your trip well in advance, there is another, more in depth, $55 tour, in which you get to go in restricted areas of the home, and take photographs inside. A word of caution on the $55 tour, you must book it several months in advance. When I tried to get a same day reservation on the tour, all I said was I was looking for the In-Depth tour. The lady on the other end of the line informed me that the next available date would be well into July. I decided the regular tour would be just fine for my purposes.

If you are only going to visit one Frank Lloyd Wright building in your life, Fallingwater is the one to go to as it is only one of his buildings known to exist with all of the original furniture in tact. The home is decorated exactly how it was in the early 1950's...down to the paintings on the walls, the liquor on the coffee table and the books on the shelves. It is as if you are a guest inside a home someone's living in, except there are very strict rules about touching anything at all.

The cafeteria on the grounds on Fallingwater is where I had my late lunch. The food served is spectacular. I'd recommend waiting and eating on the grounds, rather than getting a bite at the first place you come to. It's well worth what they charge.

After leaving Fallingwater, I followed 381 North to Mill Run. Soon after Mill Run, the road starts to wind down off the Highlands. Be very careful. Follow the speed limit as closely as possible. Not because of police presence, mind you, but the road is extremely curvy, and there are no guardrails. If the need arises to brake suddenly, you want your brakes cool(er). I overheated the brakes on the Volvo on the way down even though I was extremely careful to use a lower gear and to stay off them as much as po 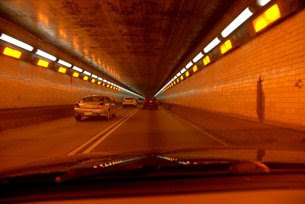 ssible. Near the bottom I had very limited stopping power, which necessitated a stop in Connellsville, PA for a re-fill on my diet pepsi, and a few circles around the car to make sure the brakes had cooled.

Aside from the braking incident, the trip into Pittsburgh was rather uneventful with the exception of hitting rush hour traffic on the Turnpike, and leading into the tunnel on the 376. Once past the tunnel, traffic flowed freely all the way until I got to Station Square. A bit of advice on station square. It's just like any other tourist trap. In fact...that's all it is. The restaurants look like they should be local (with the exception of the Hard Rock Cafe...which by the way is a chain I detest, and will not go to even if it's free) most of the places are little known chains. I got trapped by that. Where I could have ridden one of the inclines up to the top and gotten a real local restaurant, I ended up eating at a chain I had never heard of, that while the food wasn't bad, it was still a chain, so I will not mention the name. However from my table at dinner, I did have a beautiful view of Downtown Pittsburgh across the river (pictured). It was almost worth breaking principle for. Trains flew past on the tracks that were 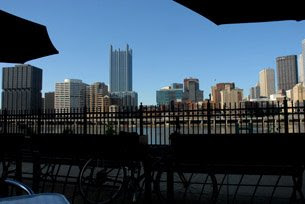 between where I was sitting and the river two to three times while I was having my dinner. Interestingly enough, you can feel the trains approaching well before you can hear them.

Parking for the length of stay I was at Station Square was $4.00. I could have gotten it validated, however, you have to spend $50.00 on tourist-trap stuff at one of the multitudes of gift shops in the shopping center. I'd rather just pay the $4.00. The restaurants do not validate. While I enjoyed my time at Station Square, it would probably be more fun had I been there with someone else. There is plenty to do in and around the center...you just have to know what is going on.

After dinner, I crossed E. Carson St, to ride the Incline up to one of the many overlooks. A word of caution to anyone who A) is positive they have a fear of heights, B) has a limited fear of heights, or C) thinks they could possibly have that fear residing anywhere inside them, take a cab. The incline feels rickety. I was assured by the lady running the thing it was perfectly safe, but it still definitely got the best of me. I stayed up on the hill only long enough to take 1-2 pictures of downtown (see below), before climbing on the Incline and riding back to the foot of the mountain.

When I got back down, it was nearly dark, which meant it was time to climb back in the Volvo and drive the four hours back home. I decided not to go I-68 back to Virginia as I had tortured the poor car enough for one day, but rather to take the Pennsylvania Turnpike. The first way station outside of Pittsburgh is nearly an hour and a half on, so get gas before leaving Pittsburgh if you're concerned about fuel level. Ironically, when I got back to Breezewood, I ran into a tour group who was staying at my hotel in the days before. They recognized me, I didn't recognize them. 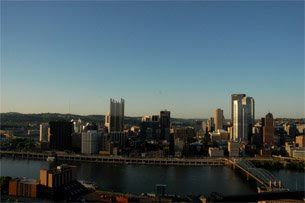 The only issue on the way back home was just south of Frederick on US 15. They were resurfacing the road between Frederick and Point of Rocks, MD which means 15 had gone from one lane in each direction to one lane in one direction. After about a 5 minute wait I was moving again, and ended up pulling back in the driveway promptly at 12:20 AM.

It was a spectacular trip. There's a lot more in Pittsburgh to do that I didn't get to do, which means that a return trip is already in the works!

Total Mileage for the day: 468