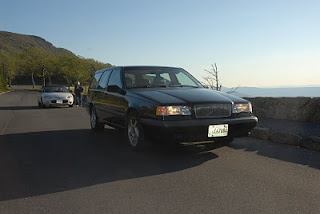 Today was quite a big driving day.  I hadn't realized what I was up against before I left my house.  It being Mothers Day here in the US, of course, I went to see my mom in Harrisonburg, Virginia.  I left my house at around 10:00 AM and got to Gainesville, Virginia before realizing I had left my wallet at home...which meant turning around and heading back to Sterling to pick up that essential piece of traveling equipment.  Once retrieved, I headed back in the direction of Harrisonburg.

The drive down was uneventful.  It struck me several times how amazingly beautiful the day was.  The cornflower blue sky was only dotted with a very occasional cloud.  There was very low humidity, so when I got down to the Shenandoah Valley, the mountains were absolutely amazing. 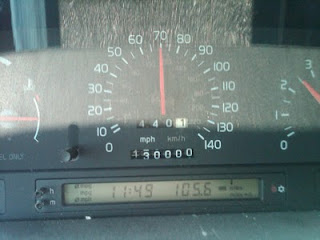 Right at the end of I-66 the car rolled over to 130,000 miles.  45 minutes later, I pulled into Harrisonburg off of Exit 245.  For those of you familiar with the Shenandoah Valley, that is the exit for James Madison University.  Having grown up in Harrisonburg, I was rather surprised.  JMU's Bridgeforth Stadium is undergoing a massive renovation, which actually made me alter the route from my grand parents house back to my parents.  So sue me, I wanted to see what was going on.

After lunch with my grandparents, a quick stop at my parents to load up some hiking gear and get on the road.

Driving in convoy is challenging.  Most regular readers know I generally travel alone, in my car, with no one following or leading.  Since I was going to be going down one side of the mountain, and my parents would be going down the other to get home, it became necessary for us to use two cars.  So, my mom and I loaded into my Volvo, my dad into their Chrysler Sebring, and we headed up to Shenandoah National Park.  It only took five minutes on the road for the Sebring to disappear in my rear view mirror.  Not being one to like to doddle, I told my mom to call my father and tell him to catch up.  We couldn't reach him for awhile, so we assumed he was on the road.  By the time we got in touch we were in Penn Laird, VA and he was in Broadway...10 miles in the wrong direction.  We decided to nickname him "Captain Slow"  as a tribute to James May. 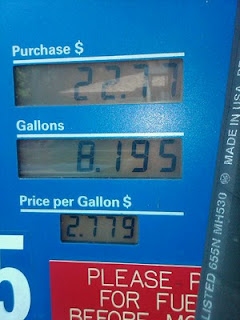 So to kill time (we had 20 minutes) we stopped to get gas in my car, and get it washed.  No offense meant to anyone who might be from the area, but people from rural Rockingham County do not know how to properly handle a gas station.  For the record, proper filling station technique requires you to pull through the pumps to the first available pump, in the same direction on both sides of the pump.  Since the Volvo has the filler cap on the correct side of the car (passenger) and all the American garbage that was filling up at the same time has their caps on the incorrect (driver) side.  I had to wait...not in queue, rather, far back from the pumps hoping someone wouldn't slip in from the other side.  Finally a pump opened.  It amazed me when I finally pulled up to a pump how incredibly cheap gas in the Shenandoah Valley was.  I'm used to paying $.50 more per gallon here in Northern Virginia.  When we were finally filled, Captain Slow was still nowhere in sight, so we pulled through the car wash, and got the Volvo cleaned up a bit.  About the same time we pulled out of the filling station, he had caught up and up the mountain we went.

About half way through the climb, I noticed a Jeep Grand Cherokee gaining on me.  With US 33 being much more inclined to a Volvo Station Wagon than a Jeep Grand Cherokee, I decided there was no way that bastard was going to pass.  So, in to the floor went the pedal, and up the mountain we went.  By the top of the mountain the Turbo Charger was glowing red.  It was downright exhilarating.  The Jeep did not catch us (it's likely that he didn't know we were racing)...but in the process, we lost Captain Slow, again.  The final score was Volvo 1, Jeep 0.  Yes, Mr. Jeep.  You just got pwned by a 1996 Mommy Mobile. 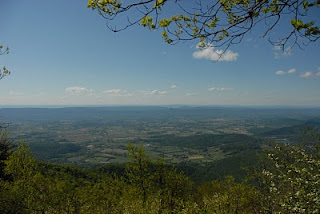 At about 2:30 we entered Shenandoah National Park.  I purchased an annual pass in hopes to motivate me to utilize the national treasure we have up there more than I have in recent years.  I used to spend almost every Saturday up there with my best friend in High School.  There are not many hikes I haven't done along Skyline Drive between US 33 and VA 211.  After discovering that my favorite Way Station was closed permanently (Panorama) we elected to hike from Skyland rather than there.  Mary's Rock was what I really wanted to do today, and after hiking to the overlook that we went to, I realized how incredibly out of shape I now am, and that I never would have made it to the Mary's Rock summit.

It ended up being a perfect day for a hike.  We hiked to Miller's Lookout near the Skyland Resort.  It was a great length for a few hours in the woods, and culminated with a magnificent 360 degree view.  Since the hike to the lookout point was mostly down hill, to return to the parking lot we had to hike mostly back uphill.  Note to self:  hiking up, then back down is preferable to hiking down and then back up, especially for those of us who's waistline has expanded a bit in recent years.

After returning to Skyland, we had a much welcome dinner in their restaurant (which I highly recommend).  I had a glass of Cabernet, along with some absolutely divine fried chicken.  My only complaint about the dinner was the portion of mashed potatoes I was given rivals in size what I used to eat in Elementary school.   After dinner we loaded back in the cars and continued north on Skyline Drive to VA-211.  Along the way, we got behind a Ford Escape who decided that while the speed limit was 35 miles per hour, the better speed to drive on Skyline is actually 25.  Rather than doing the polite thing and allowing us to pass, he slowed to 20 and kept moving.

Coming from Skyline Drive and heading down the mountain towards Warrenton is by far one of the most beautiful, exhilarating and fun driving roads on the east coast of Virginia.  Unfortunately for me, the Escape was heading down the mountain in the same direction we were.  So rather than getting to have fun on the way down, I was stuck behind a lumbering Ford Escape driving close to 20 miles per hour below the speed limit.  Despite having many opportunities to pull off and let us pass, he continued down the mountain at 20 miles an hour below the speed limit.

Finally just passed Sperryville, VA a section of road that allowed passing opened up and I was able to blow past him.  With the turbo needle pegged at max, I hit nearly 70 miles an hour when I was going around him.  My mom was not impressed.

Finally, we reached Warrenton, VA where we met up with my Aunt, my Uncle and his new wife at iHop to say hello for Mothers Day.  The rest of the ride home was as expected.  Typical Northern Virginia driving.  At 8:00 pm I pulled back in my parking spot.