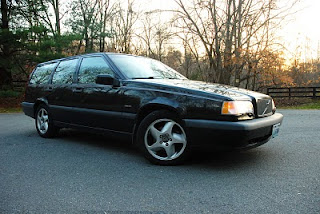 It's quite amazing really, It's only May, and I've driven the car 5000 miles since my last entry.  Quite a bit has happened.  I got to experience a hard winter in the Volvo.  As most realize, we got hammered with snow here in the Washington DC Metro Region.  Overall, we ended up with six feet of snow.  I learned, that even without all wheel drive, the Volvo can drive on any road that has had any traffic.

Six feet of snow, though, took it's toll on the car.  As time went on, what was a nice hard packed surface, got pitted, and potholed.  Even though the solid surface below the packed snow wasn't, it did a nasty number on the suspension of the car.  I ended up having to get new\ ball joints, and another new alignment.  The worst bit of damage was actually the cheapest to fix, however...at some point during one of the snowstorms a wheel balance weight got knocked off.  If you've ever driven a car with an unbalanced wheel, you'd understand

Finally, the snow melted.  Just in time for the check engine light to pop back on.  As it turned out, the evap system for the car went out.  $1500 later and I got the car back.

After a few days, though, it started to warm up.  I quickly learned that the Air Conditioner was out of coolant.    Two days after getting the car back from the evap system, I had to put it in for the air conditioning, and (embarrassingly enough) a turbo hose that ruptured while I was enjoying the car at full power.

As far as where I've gone and where I've driven...Aside from one trip to the GW Parkway for a relaxing afternoon, I haven't strayed too far from my normal stomping grounds.  Reston, Annandale, and Sterling.  In the next two weeks, however, I've got a few possibilities for a day trip planned, including but not limited to Philadelphia, Virginia Beach or even a potential return to Pittsburgh.

This past semester was a bit more hectic than I thought, which is part of the reason for my absence, however, I will not make any excuses and just be a lot better from now on.

That's all for today.