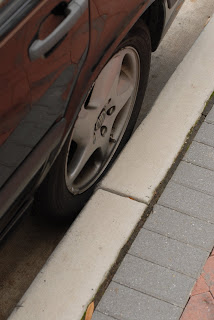 I left my house at 7:45 to meet up at a local 24 hour diner for a breakfast meeting with a friend of mine. It's not a far drive...it usually only takes 10 minutes, since I was supposed to be there at 8...I pulled into the parking lot at 8:05. The killer is that rush hour wasn't even that bad, I just forgot to allow for the light timings.

After breakfast, I left to head back home and get ready for my lunch meeting. Lunch already? Yes. Here in DC there are more good restaurants than there are days in a year. Our town is a foodie's heaven. Since lunch was in the Arlington, VA neighborhood Rosslyn at Ray's Hell Burger, I had to allow time for travel down to Rosslyn at lunch hour (we have a third rush hour every day...11-1) as well as allow time to drive around and find a parking spot.

I arrived at Ray's Hell Burger right on time.  Of course, there was no parking available in their lot when I arrived, which meant laps around the block until a spot opened up.  As I was pulling out of the parking lot a left-hand parallel spot opened up.  Aside from tearing up my rims (pictured above) and using all my quarters on the meter, it was a perfect spot.  Left hand side parallel spots are a product of the devil...especially for left hand drive cars.  While parking, I actually physically ended up on top of the sidewalk at one point, which not only inspired rounds of laughter from passersby, but made me decide to completely pull out of the spot, and attempt it again.  The second attempt (pictured above) atleast I stayed within the lines...I just couldn't tell where the car ended.   When the tire finally lodged itself into the curb I just let the car sit and fed the exceptionally hungry meter.

Lunch at Ray's is quite an experience that anyone who has never been before needs to try at least once.  First of all, they serve (in my humble opinion) what has to be the best beef burger known to man.  They grind cuts of steak into their burgers, therefore, you can have it cooked properly, at about Medium Rare or even less.  Next, they add whatever topping you would like, whether it's as simple as chedder or as complex as foie gras and white truffle oil.  Rather than napkins, they provide each table with a (very necessary) roll of paper towels.  At first it is a bit off-putting, however soon after my first Ray's burger landed on my table, I was greatful for the paper towels rather than the wimpy paper napkins used by most takeout joints.  Also, be warned, they only accept cash.  No cash, no burger.  It's well worth the ATM charge.

My friend Meta arrived about 10 minutes after I did.  Unfortunately, she had a much more difficult time finding a spot than I did.  She also burned all her quarters in a meter, only to find out when she returned to the restaurant that there were three spots open in their parking lot.  Needless to say when we got our change, both of us asked for quarters. 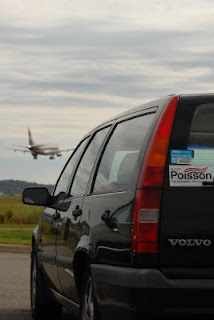 Lunch ended at around 1:30 PM.  I crossed the street and headed southeast to the Crystal City neighborhood, where I was supposed to meet up with my friend Matt at about 3 pm.  I killed a lot of time at Gravelly Point watching the planes land. (Pictured right)


At about 2:50 I left the park and headed in to Crystal City to find a parking spot.  At first I found one, and fed the meter, only to find out that I wasn't expected at his house (as I had thought but a quick review of my text messages revealed I was incorrect) but at Pentagon City Shopping Mall.  Unfortunately for me that meant all of my quarters were gone, and there was a parking meter in Crystal City with three hours of time remaining for some lucky person who happened to run across it.

The trip to Pentagon City was uneventful with the exception of...again...parking.  Finding a spot wasn't a hassel, leaving was.  Somehow when I was in the mall, my parking ticket managed to disappear.  The parking company only accepts cash, I had $5.00.  The lost ticket fee is $16.00.  I showed the lady proof that I had only been in there for an hour (a reciept from the meter I had bought earlier would do the trick...or so I thought) she didn't care.  Eventually after I threatened to block the entry of the parking lot until she either took my credit card or let me out for $5.00 the lost ticket fee suddenly became $5.00.  Still fully $3.00 more than what I should have paid to park there, but significantly less than the $16 I was going to have to pay.

After leaving Pentagon City, I headed directly to class in Annandale, VA.  With the exception of a badly marked detour which ended up getting me lost on the way home, and slight rush hour traffic on 395 on the way to class, both legs were uneventful.