On the Road Again: Toronto, Part 1

Please be advised: the trip to Toronto will be posted in three parts over the next couple days. It's far too long to post all at once. A fourth part of the series will detail advice for long road trips to places you've never been before. Specifically things I learned on the trip to Toronto.

While I'm generally not a huge advocate for planning road trips well in advance (spontaneity is part of the charm of a road trip), my trip to Toronto certainly qualified for some more in depth preparations du 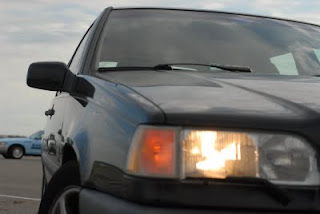 e to customs, auto insurance, cell phone charges, vehicle inspections, border agents, not to mention, vast stretches of road which I'd never traveled, including large parts of two US States (Pennsylvania and New York), and one Canadian Provence (Ontario). Basically, by the time I left my house on October 15th, not only did I know how far I expected to get on each tank of premium, but I knew exactly where I was stopping for lunch, which gas stations (I only use one brand of fuel...once they decide to sponsor the blog, I'll tell you who) I would fill up at, which Service Plaza on the Pennsylvania Turnpike I would get breakfast at, which restaurant I would get lunch at, and predicted within 5 minutes what time I would end up crossing the Canadian border. (Above: The Volvo, Stock image. Because the weather was so lousy, I didn't take many pictures on the way up. Apologies all around).

Even with the dreary, cold, rainy weather the entire way up, road construction projects taking up one lane of highway the entire way through Pennsylvania, heavier than expected traffic in and around Erie...and having my Nav system's battery die in Buffalo on my way to get lunch, I still made it across the border right at 2 PM which is what I had originally planned. My goal of beating rush hour in Toronto appeared met.

I left my house at 4:00 AM sharp on October 15th. It was heavily overcast, but not raining. By 4:20 I had left Virginia and crossed the bridge into Maryland. I made very good time through the hours before the sun came up, crossing the Pennsylvania state line by 6:00 AM. I stopped at the first rest area in Pennsylvania to stretch my legs a little bit, and discard my already empty diet soft drink bottle. Surprisingly enough, I was around two hours outside of what is generally considered the Washington DC Metro Region but was still picking up the local NPR station (WAMU 88.5) crystal clear. At the rest area I decided it'd be a good idea to switch to my MP3 player rather than continue on with the radio, knowing all too well that the station would not last too much further into Pennsylvania.

By 6:10 I was back on the road, watching the miles tick by. I didn't get terribly far, however, before it started to rain. The first drops started hitting the windshield soon after I left the rest area, and picked up gradually. It didn't stop raining until almost 30 minutes after I crossed the Canadian border. About 15 minutes out of Breezewood, PA I hit the first construction project of my trip. I've not seen as much road construction on a road trip before as I did on this one. There were several work zones on the Pennsylvania Turnpike, on I-79 and on I-90 as well.

I usually stop at Breezewood for a quick bathroom and food break, however, when I came through, nothing was open yet, and my first scheduled stop wasn't until the Midway Service Plaza on the Turnpike.

By 6:30 I had pulled through the toll booths and on to the Turnpike. My nav system told me I should get off only a mile into the turnpike, however, the route it recommended me to take included many back roads, and Pennsylvania is notorious for not marking roads very well off the interstate. So, ignoring the lady in the box, I continued on the Turnpike, blowing past the I-99 exit without even looking twice.

By this point, rain was absolutely pouring down, and the thermometer in my car precipitously dropped below 40. The outside temperature was only 33 degrees when I pulled into the Midway Service Plaza. A bit worried (it was still raining...and it was 33 degrees) I went online with my blackberry to check the weather ahead of me. I decided that taking a quick break for some Cinnabon would be a good way to kill a few minutes and let the temperature rise a few degrees. Midway was where I had originally planned on getting breakfast, however, the only thing open was Cinnabon and Starbucks. While I enjoy what both companies offer, neither offers anything substantial enough to carry over on a day of heavy driving.

Fortunately, after some research, I concluded the temperature had not dropped far enough overnight to cause any issues with ice, so after a cinnamon roll and my second diet soft drink of the day, I got back in the Volvo and continued westward.

An hour later, I ran across the New Stanton Service Plaza, which advertised a Burger King on site. By this point I was ready to chew off my right arm I was so hungry. I was not the only person on the Turnpike with that idea. The line at the burger king was easily two dozen people deep as it is the first place I'm sure anyone had seen open that morning, and I didn't feel like waiting, so I pushed ahead, and didn't stop again until about half way up I-79.

I-79 was probably the least well researched part of my trip. Because of this, I know on my next trip, Cranberry, PA is the last worthwhile stop after getting on 79 before Erie. There is absolutely nothing on I-79 except for an outlet mall and about two exits with a McDonald's. So, that being said, if the tank is low, fill up in Cranberry: the next easily accessible gas station isn't really until Erie. One of those two McDonald's was where I finally found breakfast.

In Erie I picked up I-90 East. I noticed my tank was down around a quarter, so I watched for the exit for the service station I had mapped out on the way up. After finding the station and filling up with premium unleaded, I continued on I-90.