On the Road Again: Toronto, Part 2 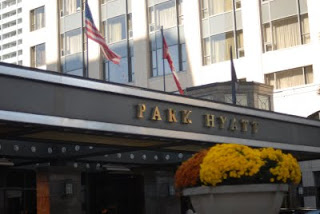 I pulled into Erie PA at about 10 AM.  Like I said in the previous post, I made very good time by leaving at 5 AM.  While the drive up I-79 was incredibly boring, what I didn't know is the drive along I-90 would be just as bad, only due to the fact that the sky was incredibly cloudy, and it was still raining in torrents.

As noted before, I had mapped out my stop in Erie before I had even left my house in the DC Suburbs.   I pulled in with a full 1/4 tank left to re-fill the Volvo, exactly as I had planned.  The drive along I-90 was exciting knowing that if the sky were clear, I would be able to see north to Canada.  At this point in my trip, I had never even seen Canadian soil, much less stepped on it.  I kept looking left, without any luck, because according to my GPS unit, there was a large body of water (Lake Erie) within a kilometer to the left of where I was sitting.  As I was driving along, I noticed on the GPS screen that not only was there a body of water to my left, but there was also another road that drove along the lake shore...NY/PA 5.  I decided right then that the trip home was going to be a lot more interesting than the trip up.  I kept debating getting off I-90 and on to Hwy 5, but at every exit, I opted to remain on the interstate rather than getting off and driving on a secondary highway, which was probably a good decision considering the weather, and the fact that I wanted to be checked into my hotel before rush hour started in the 5th largest city in North America.

I pulled in to Buffalo almost exactly at noon.  What was surprising to me about Buffalo, is how incredibly depressing the city is.  What was at one point clearly a wealthy town, is starting to show a good bit of wear.  What were grand early 1900's homes, now have flaking paint, rotting wood, and broken windows.  It seemed that for miles, all that was visible from I-90 were abandoned warehouses and factories.  When I pulled off I-90 and headed downtown, evidence of the town's vibrant past was everywhere: from the ornate street lamps to the still well manicured parks.  A few quick turns, and a navigation-system guided trip through what was clearly not one of the safest neighborhoods in the city landed me in the main parking lot of Anchor Bar, home of the Buffalo Wing.  The most interesting thing about sitting at that bar, is it was the mother of my server who invented the damn things.  Aside from stopping at Anchor Bar one more time and any future drives to Toronto, I really don't foresee a trip to Buffalo again in the near future.

After lunch, I drove through town and crossed the Peace Bridge.  The Canadian border crossing was easier than I had expected (one of my friends did not have as easy of a time crossing as I did just a week before me).  I officially touched Canadian soil for the first time at 2:00 PM.

Once on the QEW, I was rather surprised with how different but at the same time similar Canada looks to the  USA.  It was a lot like New York and Pennsylvania, except without all the trees and hills.  The drive between the Canadian border and Toronto was only about an hour, about as expected.

What was not expected, is that even though my GPS unit recognized the address of my hotel, it didn't know how to get there.  The lady in the box piped up almost as soon as I crossed the border with "Map information unavailable...please proceed to your destination."  Fortunately for me, I had spent about a month studying maps of Downtown Toronto, and knew approximately where I was going.

As I continued on the QEW, I kept scanning the horizon for the CN tower.  Finally, I saw it, somewhere near St. Catherines, Ontario.  The bridge across the bay in Hamilton proved to be tricky, as there was enough wind that it treated my Volvo like a piece of paper.   After cresting the bridge, massive waves were visible crashing into the shore.  It almost made me forget I was on a lake. 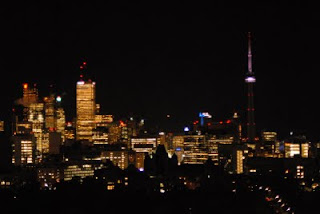 An hour after crossing the border, I pulled in to Toronto, frantically looking for any exits to roads I might recognize.  Finally, I found the exit for Younge St and proceeded north.  I knew that Younge and Bloor was a major intersection, and was not too far away from my hotel, the Park Hyatt Toronto.  While I knew they were close, I did not know that you cannot make any turns off of Younge St. throughout most of downtown Toronto.  When I finally drove around enough blocks to end up west bound on Bloor, I realized that getting into my hotel would be nearly impossible.  After a few more trips around a few more blocks, I finally made it into the Park Hyatt, and gladly handed my keys over to the valet.

After the trip in, I decided my time in Toronto would be better suited by leaving my car in the Hotel Valet rather than trying to figure out parking in the city.  Parking, as it turns out, is not cheap, nor is it easy.  After spending a good amount of time driving around the entertainment district trying to find some place to land his Saab, my friend Kevin decided he would valet his car at my hotel rather than trying to find other parking near the hotel, and we would take public transportation everywhere.  Which ended up being a very, very good plan.