On The Road Again: Harrisonburg, Va

They say holiday travel can be miserable.  They're absolutely right.  Poor planning by highway construction crews, early rush hours and more can cause massive delays.  Add that to our woefully inadequate Interstate Highway system, and out pops a mix for massive delays, and massive casualties.  In 2008, for example, 389 people were killed on our nation's highways during the official Thanksgiving travel weekend.  That's the equivalent of taking one of Airbus's new A380's and crashing it into the ocean.

Unfortunately for me, I landed right in the middle of an early rush hour, followed up with a healthy dose of poorly planned highway construction in Winchester, VA.  The early rush hour in Leesburg, VA set me back about 15 minutes, the construction in Winchester nearly 45.  When that was followed up with rolling waves of traffic dropping to a near standstill near every exit on I-81.  All told, the drive which normally takes me just under two hours, ended up taking a good bit over three.  (Pictured above: the Volvo just before leaving my house on Nov. 25th) 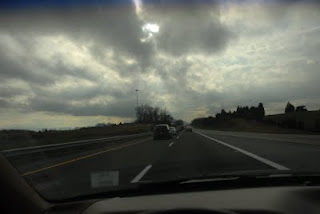 The trip started out rainy, which certainly didn't help the traffic out of Northern Virginia one bit.  After sitting in traffic on Highway 7 for what seemed like an eternity, the break came just past Leesburg.  Traffic picked back up, the rain cleared, I assumed all else would be smooth sailing over the mountain and down I-81.  Only 3 miles off I-81 the moving traffic came to a dead stop.  I moved to the other lane and pulled into a Sheetz gas station to refresh my drink. After a 5 minute break, I looked down the road to see that by pulling in to sheets around the traffic, I had moved up in line over a dozen cars.  The truck I went around at the beginning of the jam was still far back in line, and people who I had passed to get in to the gas station were the ones letting me back in to line.

After what seemed an eternity, I discovered the root of the problem, a poorly planned inactive construction zone taking away the left lane of 7.  Finally after passing the construction, I merged on to I-81 south into what appeared to be smooth sailing (Pictured above).  Until, of course, I hit the first traffic wave, only 3 miles down the road.  This was a continuing trend the entire way back to Harrisonburg.  Traffic would clear out completely, and then all of a sudden, with no warning or reason, traffic would slow to a complete stop, and then take back off.

4 hours after starting on my journey, I was home for Thanksgiving dinner.

The trip back north was far less exciting than the trip down was.  I left Harrisonburg at about 8 pm, and with a stop for gas, and a small side stop to drop off my nephew in Warrenton, I made it back in just over three hours.  Exactly as long as it should take.
Posted by Unknown at 11/26/2009 03:46:00 AM